​evoking the essence of the ancient practice of the Delphic Oracle
old technology meets new in this re-animation of the performer/pythia
as medium, mediator, instigator, vessel and author of digital and analogue transmutations. 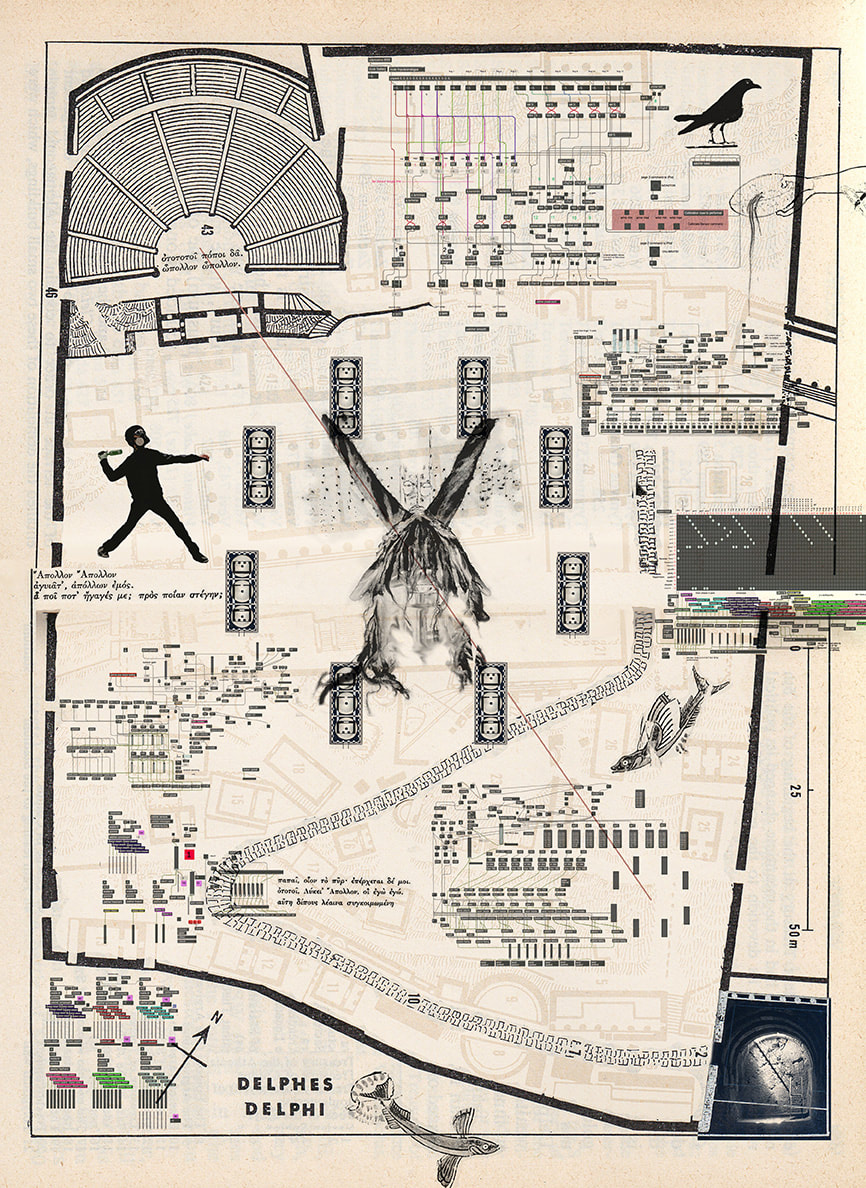 ​IMAGINE…you are standing on a high plateaux below Mount Parnassus in the ancient sanctuary at Delphi home of the Pythia: the Oracle through which the god Apollo speaks. It is the 20th July 2016 there is a full moon. We are here at a moment of social, political and economic crisis – it was at such times that the leaders of the ancient world came to Delphi to consult the Pythia/Oracle. The Pythia was famous for her riddles and cryptic messages – the warning KNOW THY SELF in relation to her counsel was not always heeded – the ego of the listener often got in the way!

The sun is beginning to set. You can see the coastline the Gulf of Corinth below and the fiery glint of the sun on the sea. The trees are beginning to release the smell of hot pine resin and the Cicadas are singing.

We have come to a modest house, a temple in the sacred grove (the ancient GREEN ROOM) where actors gather and make offerings of libations (milk, honey, wine) and personal gifts. They give preys to Apollo and Dionysus and to the much older earth energy that underscores and animates everything in nature. It is in the Green Room that the actor dedicates his/her self to the theatrical journey in the company of the energies of balance and chaos, and where s/he begins the process of transformation into an avatar for that journey.

She puts on a mask – a white face – separating and erasing the image of her everyday self in order that an Other self (selves or entities) might be seen/heard and mediated.

For more information about the Bodycoder System and its development please go to our Bodycoder page.
PYTHIA:DELPHINE21 is strongly informed by our experiences in Athens in February 2016 aspects of which are fully embodied within the work. This pieces has been made with the kind support of the National and Kapodistrian University of Athens - department of music (school of philosophy) and Professor Anastasia Georgaki. We would like to thank Vassilis Boutos the Artistic Director of the International Animart Festival for hosting the premiere performance at Delphi. We would also like to thanks the directors of the Museum of Delphic Festivals the former home of  Eva Palmer-Sikelianos and Angelos Sikelianos in Delphi for the honour of presenting the work at the house. PYTHIA:DELPHINE21 was created at the University of Huddersfield in the SPIRAL Spatialisation and Interactive Research Lab.
​