Sean Racer used to be a popular energetic wildcat youth hooked on cycling.  Now he’s a bored, overweight 40 something tax inspector on the brink of a crisis.  Turning to Claude a sage-like ex-pro cycle mechanic, and encouraged by wily hairdresser Linda a serial tax evader keen to distract him from taking a closer look at her business, Sean hatches a plan to get his life back on two wheels.  He will fulfil a youthful dream: to ride the Tour de France.  That’s right, he’s going the distance, albeit on a bike on rollers in the shed.   Will he make it to the finish? 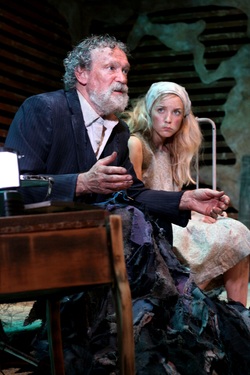 The year is 2050 and the world has changed beyond all recognition.  In a decaying house on the edge of a desert Ethan Page a down to earth former second hand car dealer and pub quiz-master, attended by a girl who can't or won't speak, sifts through his memory archive in an attempt to make sense of his life and his forty year mission to memorize "...stuff that might be important, significant, of use to someone."

Part 'an audience with...' part pub quiz, with a song and a smattering of horse racing wisdom, THE LAST CUCKOO is a theatrical tour de force, beautifully lyrical, poignant and darkly comic. 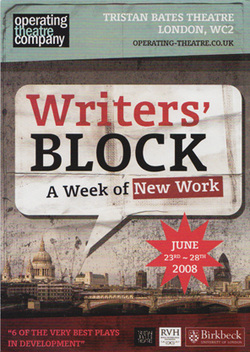 Set in an ex-mining town in South Yorkshire where the under-the-radar economy is run by the local heavies – the Jakes’ family.  TOBY-DOG-SAVAGE is a coming-of-age story about a boy TOBY (17) growing up in the shadow of his ex-boxer father, amid the thwarted dreams of his mother and within a society where violence gets you respect. The story, laced with dark humour, dog fighting and moments of fantasy, tracks Toby’s development from aimless youth to cunning and vengeful young man.

A derelict industrial interior long since abandoned.  Stage left an oil drum upon which PROP is standing, a large cloth bag over his head, otherwise naked. Thick wire cables tied to his wrists and knees, a noose of wire around his neck.  The cables extending up into a cavernous darkness. A deliberate visual reference to the photograph of a prisoner in Abu Ghraib prison reproduced on the front page of The Guardian 30 April 2004.

Script Extract:
PROP:
(painfully) Is this the end? If I relax, perhaps I’ll just...
Coward!
My life...  In the great scheme of things... A miserable, wretched little thing!  No one saw!  No one was looking when it was... extinguished.  Better that way. A mercy perhaps.

This Darkness is vicious.  It’s not the darkness in which one dreams. It’s crude oil.  Waiting for a spark.
Soft marsh-mellow sand frothed up by the sea.  The feet going in. Sand flies pricking the heels.
I can hear the seaweed sucking. Gulls spearing molluscs, prising open the dead and dying… For fuck sake!  Keep the mind...straight!

Salt! Salt! Is it blood or sweat?  The taste... carried on the breeze... fried food and candyfloss, animal hide, stale urine... and marine diesel. I know this place. It’s sand and dog shit, it’s Punch. Punch with his thin-lipped smile. Its head - a crude chunk of wood, English oak, motley with layers of paint.  Handed down, a family heirloom...more than three hundred years old...grinning in its box...waiting to be used. 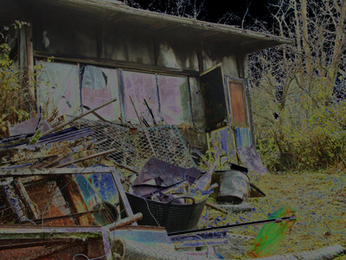 Joe Bradford lives in a shed lined with memories presided over by a chicken familiar he calls Tinker-Bell...

"...a quirky piece of urban surreal" 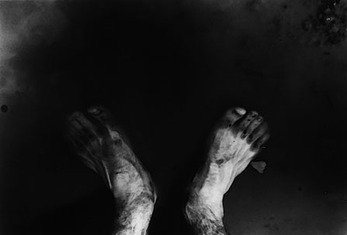 Remain Standing is a meditation on the actor spoken from the interior of a world created by Samuel Beckett.  The piece is a response to stage directions found in ENDGAME.

Commissioned by Samuel Beckett Festival and Conference '50 Years of Beckett'

An adapted from Lewis Carroll, written & directed by Juile Wilson-Bokowiec
with a courtroom opera by John Ginman
Music by Ron McAllister
Designed by Mark Hinton
The Lawrence Batley Theatre in association with Trestle Theatre Company

BEE is found staggering along the hard shoulder of the M25 half naked and covered in blood following the brutal murder of her parents Mel and Marty.  Forensic evidence puts Boyd, a homeless boy living a feral existence on the streets of London, at the scene of the crime.

BLOOD REVOLTING is a play about prejudice and easy assumptions.  Ambition, anxiety and bad parenting. It is about the construction of narratives and delusional self-images, the fierce need to cash-in and be successful and what happens when two teenagers reject the values and beliefs of the adults around them…